I come from a place where people assume that T.S. Eliot’s “The Waste Land” has something to do with ditch drainage. Here in the Sixth Chamber used bookstore, I am darn near overwhelmed with the subjects and titles carried by James Williams, owner of the bookshop. Sixth Chamber has such a literary atmosphere you can’t help but lose your penchant for ignorance. 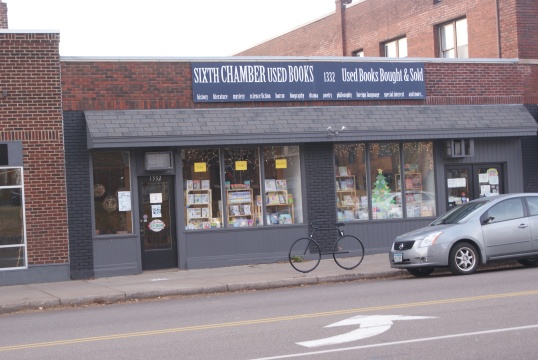 Not only are there the expected literary classics, but books on taxidermy, metaphysics, brontology, government ideologies, toponymics, and philosophy. Subjects that can make your palms sweat. Titles like Serita Stevens’ Book of Poisons, The Maxims of La Rochefoucauld, Lady Gregory’s Journals from 1916-1930, Athanassakis’ Homeric Hymns—hymns like this one that leaves you swooning:

“Sing to me, O Muse, of Hermes’ dear child, the goat-footed, two-horned, din-loving one who roams over wooded glades together with dance-loving nymphs; they tread on the peaks of sheer cliffs, calling upon Pan, the splendid-haired and unkempt god of shepherds, to whose domain all the snowy hills and mountain peaks and rocky paths fall.”

Hymns written 800 years before the birth of Christ that would probably make a good country music song:

“For my part, O Far-Shooter, I will graze the roving cattle on the pastures of the mountain and the horse-nurturing plain, where the cows are mounted by the bulls to give birth to males and females at random.”

Not only will you find chest-thumping books by Poe, Twain, and Dickens, but the novels by Russian writers will weep to you from the bookshelves with their Russian souls. Zoo, or Letters Not about Love by Viktor Shklovsky, is an epistolary novel written while he was in exile in Berlin.

You’ll find books by Rimbaud, Maupassant, Günter Grass, Jules Verne, Ovid and a twenty-volume set called the International Library of Famous Literature, published in 1898. Open up Volume VI and read Sir Thomas More’s “Utopia and its Customs.” It’ll make you shake your head and say, man, I don’t believe it.

There are books on the nature of Wiccan cooking and how Brian Boru, the Irish king, got stabbed by a wicked Dane while giving thanks to God. Endless shelves of books. Books on the spirituality of fly fishing, and why God is Red. There are art books on architecture, photography, Brazilian pottery, and German Impressionism–which sings in a completely different choir than American Impressionism, I can tell you that.

By opening other books in the Sixth Chamber, you can learn that Byron had a clubfoot, that Saint Theresa of Ávila was a Spanish mystic who gave Martin Luther a piece of her mind, and that Joe Hill wants his ashes scattered anyplace but Utah. The poetry found in Tiepolo’s Hound will make you think those lines like “a slash of pink on the inner thigh” came spewing out of a granite hillside. Unfussy, uncrushable consolations.

You can get biographies about people like Emma Goldman, the mad anarchist who lost any charm she might have had sitting in prison for two years because she opposed conscription during World War I. She was the kind of woman who came out of nowhere and went right back into it. The non-homemaker type.

Or you can get autobiographies like In Me Own Words, by Bigfoot. Okay yeah, it’s a work of illustrated fiction conjured up by Graham Roumieu out of Canada, but it is hilarious.

The Sixth Chamber used bookstore is a fifteen-minute walk from my house. Its name comes from nothing sinister but is a reference to William Blake and his mythology of books. It’s a good place to duck into out of the now approaching winter. It’s the kind of place where they want you to “Sit down. Read up.” So do it. The chairs are comfortable and the lamps are always lit.