Yeah, the title of this posting is a mouthful, but that’s what kind of evening it was. The literary carnival and benefit for CHP was held this past Saturday at the Grain Belt Bottling House where readers interacted with authors and books, interpreted poetry, danced, and played games.

Charismatic CHP founder, Allan Kornblum, who was recently given the Kay Sexton award for his life-long contributions to Minnesota’s book community, remarked, “from clay tablets to e-books, there has been a continual effort” regarding the creation of books. It’s all good, but the best of the well-written books, he believes, will still come out in print as will poetry. “There’s an electricity to the printed page” he said, a requirement of poetry that e-books cannot give.

aerialist from Xelias wowing the crowd

As part of the fundraising effort, many items from vacation getaways to expert literary advice were up for auction for people to bid on: 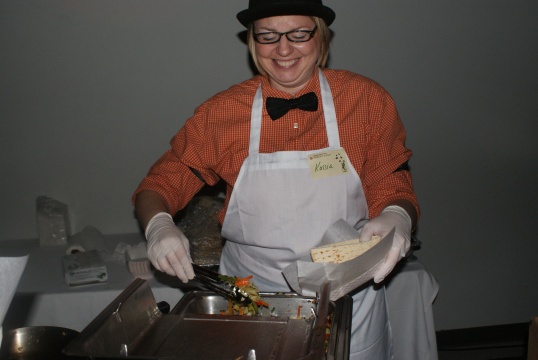 And here we are, dancers and poetry lovers all, non-verbally interpreting one of Chris Martin’s poems from his book, Becoming Weather as it was read line by line: 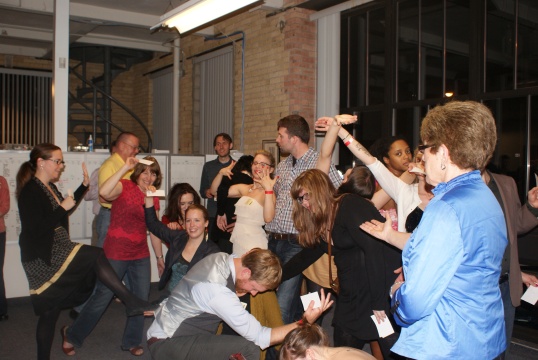 The point of the evening wasn’t just to raise money, but to engage readers with books, songs, theater, and authors. In a time where it’s all too easy to sit alone while reading–whether from a book, laptop, cell phone, or Kindle–this event was created to allow us to actively participate with the genius of language and with each other. Meeting lovely, wonderful people along the way is one of the extraordinary benefits of supporting Coffee House Press and our literary community.