Last night’s Literary Death Match, held at the Nomad World Pub in Minneapolis, was far from your typical literary reading. Goth girls, kids who play with matches, musicians, and several nods to the recently deceased Ray Bradbury were on hand in what proved to be a wild gladiator fight of words because we all know, the pen is indeed, mightier than the sword.

The scene was bursting with the subversive, raucous energy of its contestants: photographer Jeffrey Skemp, who released his first collection of poetry and music album, Spent, last year; Pete Hautman. winner of the National Book Award and the Los Angeles Times Book Award for his works Godless and The Big Crunch; Stephanie Wilbur Ash of MPR’s Electric Arc Radio fame, who has written for numerous publications and companies, and Juliet Patterson, author of The Truant Lover and the forthcoming Threnody, who has won many prizes and fellowships for her writing.

Literary Death Match series founder–Opium Magazine editor Todd Zuniga–set up the rules. The four writers were to be faced off in seven minute readings of their work, with each piece adjudicated according to its literary merit, the quality of the writer’s performance, and the most mysterious category, “intangibles.” Novelist Marlon James was the judge of literary merit, cartoonist Danno Klonowski the judge of performance, and Dennis Cass for intangibles. All were hilarious.

The first fight was between Patterson and Hautman. Patterson had the crowd cheering “love!” every time it was mentioned in her poetry, but died after Hautman read from his novel, Invisible, and emerged the victor of the first round. 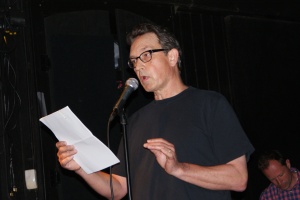 After a brief intermission, Skemp took the stage in his fight against Ash. There was an awkward moment of dead air before Skemp’s back-up guitarist got in tune but the wait was worth it. Everyone in the pub loved his whiskey husky voice. Alas, it could not compete against goth mom Ash, who had four members of the Prairie Fire Lady Choir to back her up while she read and won round two.

On to the grand finale between Hautman and Ash, which involved unscrambling letters to spell out famous authors’ last names. Hautman got hung up on the author Plath and Stephanie Wilbur Ash emerged as the victor of the night. What did she get as a prize? Bragging rights, of course. Some mighty fine bragging rights. 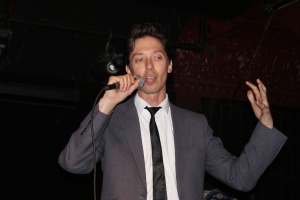